We in social
Authorization
Advertisement

Heroes of Might and Magic IV: Winds of War
Rating: 3 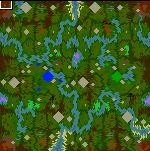 Additionally
Find all maps of the author Write to author
Share

You and your opponent are eager to fight, but Lord Bizarro has declared a month of peace, after which he will open a portal between your territories.  Thereafter he may open others, as suits his fancy.  He is, after all, as bizarre and unpredictable as the land he rules.

Leave a comments can only registered users.

Enter the site (login box on the left) or go through the simple and quick registration.

Copying and use of materials from the pages of the site
only with the permission of the administrators.
© 1999-2022 heroesportal team